Meet the Founders of Valentian Vermouth

Who are you? What’s your background?

David: “We are David and Dominic Tait, brothers and co-founders of Valentian Vermouth based in St. Boswells in the Scottish Borders. It combines the best ingredients from Scotland and Italy to create a totally unique and delicious new vermouth.

We grew up in and around the drinks industry – our dad was involved with a number of well known Scottish whisky and beer companies and even co-founded The Borders Distillery the first in the region since 1837.  So, you could say it is in our blood!”

Dominic: “We both followed our dad’s footsteps into the industry with David becoming a lawyer (working on a number of drinks deals) and myself as a Sales Manager for drinks companies including William Grant & Sons where I looked after East London.” 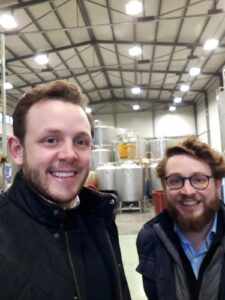 Why vermouth? – What inspired you?

Dominic: “We are both proudly Scottish, and passionate about Scottish food & drink. We also adore Italy – we spent a lot of time growing up – we love the cuisine, flavours, culture and lifestyle of the Italian peninsula! (David even got married there!)

There is so much in common with both countries – an incredible heritage in producing delicious drinks, bountiful high-quality food and a love of nature and the outdoors.

We absolutely love Italian wines, bitters, vermouths and aperitivo culture generally  – with growing up around Scotch whisky we wanted to try to bring these two great traditions together.”

David: “Vermouth has always been in our drinks cabinet, but for a lot of people it’s the last thing you think of when stocking your home bar. Reflecting on this over a negroni one night the answer suddenly hit us, why not use the greatest spirit in the world, Scottish new-make malt, to make something boldly different? We wanted to bring it up to date and to appeal to a new audience.

It wasn’t a hardship to undertake the travel and exploration to find just the right way to meld these two worlds. But we know the flavour speaks for itself.”

Dominic: “It’s an idea whose time has come – more and more varieties of vermouth were appearing in our favourite bars. Vermouth has become a big thing again in Italy, Spain, Germany and beyond. Partly we think because of the move toward No-and-Low abv (NoLo) drinking – people are concerned about drinks that are too strong or too full of sugar/artificial additives. Vermouth gives you the versatility for cocktails – packing flavour but not high-strength. “

David: “We marry Scottish new-make malt spirit, small-batch Italian wine and botanicals cultivated in both countries. We united the Fruit of Italy and the Spirit of Scotland. Nobody has ever done this before.”

Dominic: “Over the last two years we’ve thrown all our energy and enthusiasm into creating a vermouth which blends two great artisanal traditions while exploring new territories of flavour. Vermouth is a rapidly growing category. Scotland should play a part in that.”

Where does the name come from?

Dominic: “It’s named for the old Roman province of Valentia which lay between the two great walls in the

North of England and Central Scotland Like the liquid itself the name Valentian is a hybrid which honours the product’s Scottish and Italian roots.”

David: “We put the Eildon Hills near Melrose on the bottle – which links to this. The Romans called them the Trimontium (or three peaks) and had a fort at its foot – very close to our family home.”

How should we drink Valentian?

David: “Our signature serve is the Valentian & Tonic or V&T – it’s super simple: 50ml Valentian to 150ml Tonic (we recommend a Mediterranean style tonic) over ice with a slice of orange in a highball or a wine glass. It’s such a simple spritz but totally delicious and refreshing.”

What are your favourite Valentian cocktails?

David: “ For me it’s got to be a Boulevardier – it’s a whisky negroni and absolutely delicious. Especially with something full-bodied like a Balvenie Doublewood or a smokey Lagavulin”

Dominic: “I like it simple with a V&T, or if I want something even more flavourful a Negroni – the spritz style with prosecco the sbagliato is delightful too. Or if I’m going boozy a Rob-Roy (Scotch Manhattan) with something fruity like an Arran Amarone…basically it tastes great however you drink it!”

What does the future hold?

Dominic: “Later this year we hope to announce some exciting plans about the opening of Valentian’s new “home. We can’t reveal too much right now but it will be in the Scottish Borders.”

David: “It’s not just in Scotland that we’ve had a great reception for Valentian, we’re starting to work with some partners abroad – so look out for some announcements over the next year about where you can get us in other countries.

We’ve also finished up the secret recipes for our dry (secco) and semi-dry (bianco) expressions – we’ll be launching them in the near future.

What we’re really excited about is our long-term dream to build Scotland’s first dedicated ‘Vermouthery’, where we will produce Valentian, launch new lines and have a bigger tourist experience – but this is a little away. In the meantime, we’ll be sharing the passion for Valentian on social media, in bars (when they open) and hopefully letting you try at food & drink festivals in 2021. Fingers crossed!”

In the mean-time Saluti and Slainte!